In the 47th anniversary of the declaration of martial law, a lot of talks have invaded the news again.

Both the negatives and the positives have been pervading the airwaves, it would only depend to whom you would like to believe which is which.

President Rodrigo Roa Duterte being the 16th president of the republic was put into a highlight when he declared martial law in Mindanao last May 2017, up until the present.

The Supreme Court has quashed the different petitions questioning the authority of the Executive branch in its decision in extending the declaration of Mindanao.

Martial law has been instrumental in quelling the Maute group in the Marawi as well as keeping the peace and order in the critical islands in Mindanao.

The Presidential sister, Ms. Jocellyn is the younger sister of President Rodrigo Roa Duterte, shared another tirade against the Liberal Party while wittingly relating it to Martial Law.

Ms. Jocellyn Duterte Villarica recently shared her thoughts on Martial Law and the Liberal Party. On her Facebook, the younger sis of President Duterte shared a post from a Marcos Loyalist page, stating that the return of yellow’s Liberal Party senatorial candidates during the last senatorial elections, could be more detrimental than implementation of Martial Law. 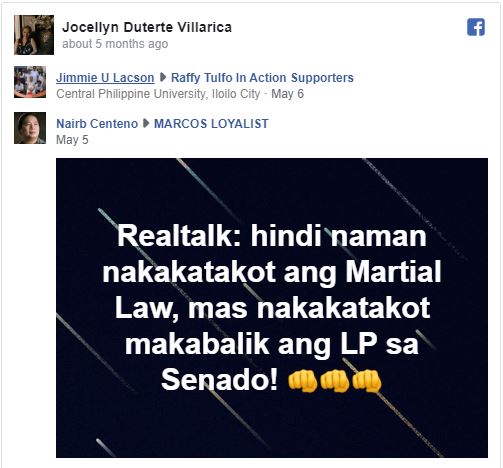 Sison has no right to demand from government – Panelo

Actor Piolo Pascual reveals he was not allowed to endorse Duterte...