In a Twitter post by GMA News, they showed the female restroom at the sport facility that have urinal. The post also mentioned the controversial two toilets in one cubicle found at the Rizal Memorial Complex. 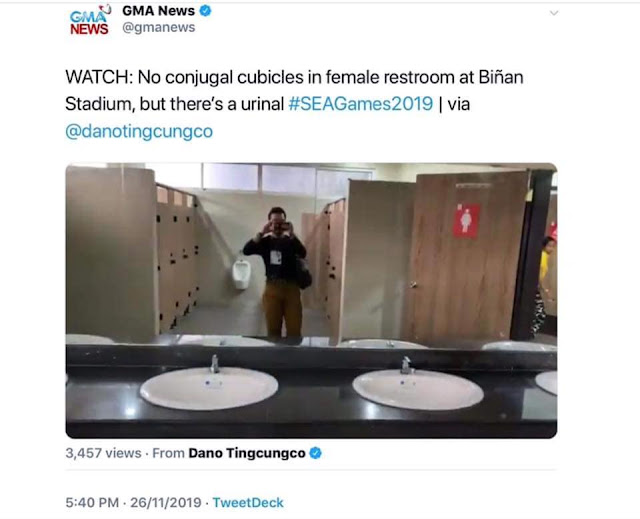 Tan also said that GMA News are only trying to find fault with the SEA Games. “What was Dano Tingcungco doing in a ladies rest room? Was he highlighting the urinal inside the same rest room?GMA News took down the tweet. Fault-finding and ignorance lowers a reporter’s reputation. If it chooses to feature the ignorant fault-finding, it lowers the network’s credibility. That’s why I don’t watch or listen to GMA News anymore,” lambasted Tan.

Since many of our netizens are now cooperating in the social media especially in the upcoming SEA Games, one of them immediately downloaded the video before being deleted by GMA News.

In a series of twitter posts, Tingcungco clarified his reporting on the Biñan Stadium.

“Part of my coverage yesterday on the PHL Malditas’ opening match vs Myanmar was to see the facilities of our team’s homecourt, Binan Stadium. Binan had a clean, organized area for spectators and media, and also well-appointed restrooms… One of the features of the female restroom there was a urinal.

Organizers told me that it used to be an all male restroom but the female restroom was added there because of additional bleachers in the stadium and that the urinal was part of the original men’s restroom…This morning, event organizer Ariel Serrantes told me they couldn’t remove the urinal before the matches started but instead of covering it, they will repurpose it for toddlers to use,” according to Tingcungco.